Benefits of a Conservatory Ceiling Fan

A ceiling fan can bring cool and comfort to a hot and sticky conservatory in a cost-effective and quiet manner.  It provides approximately 5 deg c of natural cooling through what is known as the “wind chill” effect where a slight breeze makes the skin feel cooler.  It can cool much more than that if a window is open, and the air outside is cooler than inside, which is quite likely to be the case in a conservatory since it is working like a greenhouse ie letting the heat in but not out.  A conservatory ceiling fan doesn’t generate any dry air like air conditioning does that can cause damage, discomfort and dryness to one’s eyes.

A conservatory ceiling fan will cost a fraction of an equivalent air conditioning unit not only to buy but to install and run also.  Installation is just a question of fixing a standard mounting bracket and then wiring it in.  No annual maintenance is required and very little to go wrong.  You should have years of worry-free operation.  Some ceiling fans have been known to operate for 60 years!  Energy costs are very low at about 5% of an equivalent AC system.

It is very environmentally friendly and has a low carbon footprint since it uses the electricity of a 60w bulb to do this.  Some of the latest DC fans work on just 11w of power and so can be left on all the timer.   Compare this to the energy usage and expense of an air conditioning unit which would typically take 3,000 w.

Reliability is another important factor since a ceiling fan has only one moving part there is very little to go wrong.  They can thus operate year-in year- out without maintenance or cost.  Some manufacturers such as Hunter provide a Lifetime Warranty which means a worry free product.  If you add on a lighting kit and control the fan speed with a remote control you have the perfect set-up for a fully functional and luxury conservatory.

Conservatory ceiling fans provide a gentle stir of the air in the room rather than a point source of high speed and noisy wind.  A properly designed and manufactured ceiling fan should produce no noise from the fan itself and only a very small amount of wind noise which would be lost in the ambient background sound that is around.  If you are experiencing any annoying buzzes, grinding noises, knocks or hums then it is time to replace your ceiling fan with a quality brand such as Hunter who test all of their models in approved sound laboratory for quietness.  Many factors in the design can influence the quietness of the ceiling fan not least of which is the angle of the ceiling fan blade which has to be optimised for both performance and quietness.  Cheaper brands don’t bother with this and simple set a standard 12 degree angle on their blades.

Better quality conservatory ceiling fans can be run in reverse in the cooler Autumn and Spring evenings.  This brings the hot air from the top of the conservatory down to the floor level saving on expensive heating costs. 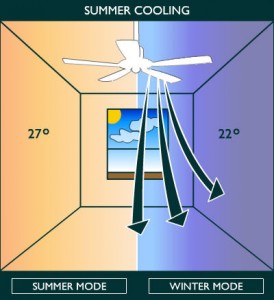 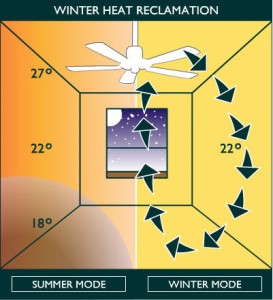 A conservatory ceiling fan can provide a focal point for the conservatory.  With such a wide range of styles and finishes on the market both traditional and modern you can pick a ceiling fan that adds not only great function but great style.  Hunter Fan  for example have an enourmous range of 36 models in up to 6 different finishes so there is something for everyone.